The Making of the StaticWorx Cartoon

Designing the new site, we asked our technical service reps for a list of the most commonly asked questions or sources of greatest confusion for the people they speak with each day. Far and away the most cited questions involve resistance and charge generation. People are understandably confused. What do the terms mean—and how are they related? The quick answer is, they’re not: resistance and charge generation are two different electrical properties.

In almost any discussion about ESD flooring, the word conductivity comes up.

In case you’re wondering, conductivity is the electrical property that allows a floor to conduct—or discharge—static to ground.

Well, no, not exactly.

Conductivity—measured by its opposing force, electrical resistance—draws static away from people and objects on an ESD floor, transports the charges through the floor to the conductive adhesive or underlayment (the ground plane electrically unifying the tiles), and the conductive adhesive (or ground) plane sends the charge to an earth ground, such as an outlet or an I beam.

Electrical Resistance: Electrical resistance describes the capacity of a material to stop, or resist, the flow of electricity. We use resistance tests, measured in ohms (Ω), to predict how quickly or slowly an ESD flooring material will transport static charges to ground.

Low Charge Generation: The term “low charge generation” replaces the older, less descriptive term “antistatic” (or anti-static). Low charge generation is a property that refers to the propensity of a material (or flooring material) to inhibit static charges.

Low charge generation should not be confused with conductivity or grounding. A low charge-generating floor may or may not be electrically groundable. Likewise, a grounded floor may generate enough static to cause a damaging ESD event

This is why ESD floors should be evaluated for both conductivity (electrical resistance) and charge generation.

As shown in the cartoon, that’s only part of the story. While most laypeople have a reasonable understanding of conductivity, low charge generation is a new requirement for ESD floors. Until 2014, charge generation—aka walking body voltage—tests were not required by ANSI/ESD S20.20. Instead, floors had to pass a system resistance test. Even the term—low charge generating—is new. A floor that inhibits charges when people walk used to be called antistatic.

While we explain the terms and the way ESD flooring works in numerous articles and posts, even we know that the technical details can be boring. And we’re passionate about this!

So, we thought, how do we explain a boring technical issue without putting people to sleep? With humor, of course. And the idea to create a cartoon was born. Hopefully, people will laugh. 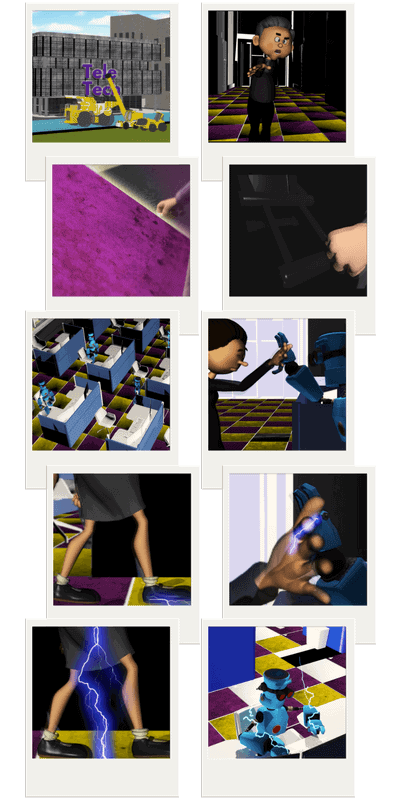 The cartoon begins with the grand opening of a new multi-billion-dollar call center. Project managers, Jane and Joe, are behind a window, watching a fleet of AI robots march into the space. In a series of flashbacks, we’re given a glimpse of their decision-making process. Tasked with selecting an antistatic floor, assuming—as many of our clients do—that conductive floors are also antistatic, they purchase the most conductive floor on the market, in a color they love.

Congrats from the Big Boss reinforce their sense of accomplishment and pride in the job. As the shift supervisor enters the call center, we see a tiny static charge at her feet—and get the first inkling that Jane and Joe may not be in line for the fantastic rewards they’re envisioning.

Big Boss invites Jane to pull the lever, activating the robots. As the supervisor walks into the call center, static builds on her body. Sparks fly as she high-fives a robot. The robot touches his computer, transferring the static charge—and pandemonium erupts in the call center.

As we walk across a floor, the contact and separation between the floor and soles of our shoes generates static—as it did on the supervisor in the cartoon. Then discharges to the first person or object we touch. 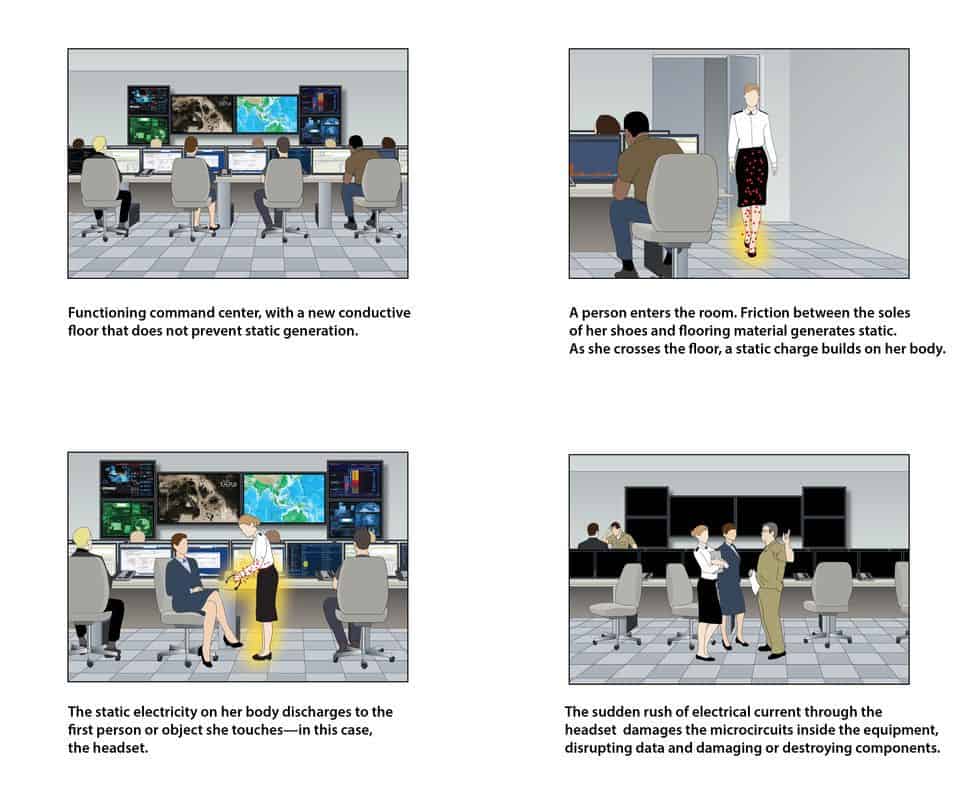 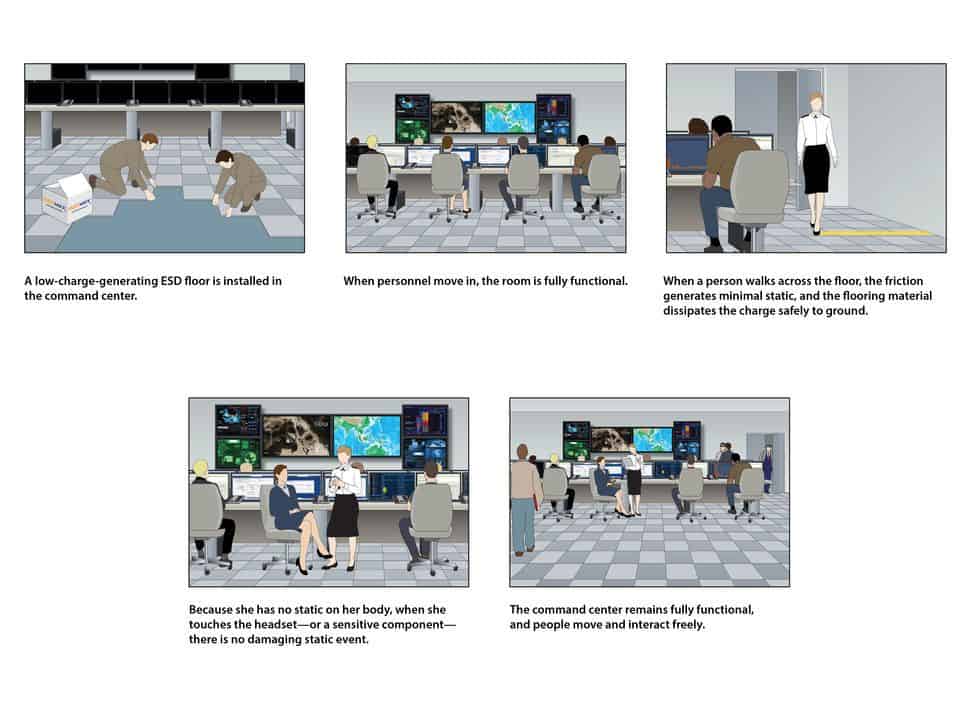 When the supervisor high-fives the robot, the sudden rush of current damages its internal circuitry, then destroys the circuits in the computers, and shuts the call center down. 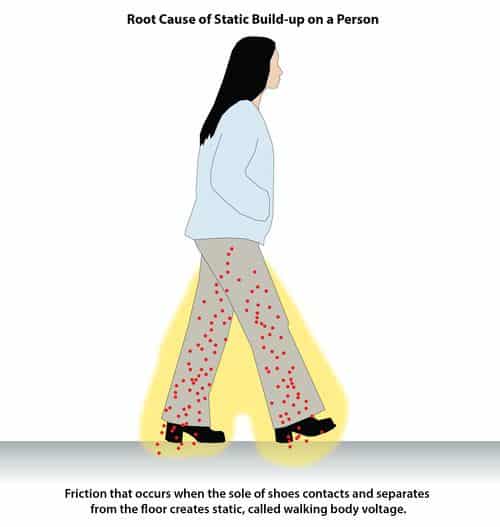 As we learn from Jane and Joe’s mishap, even the most conductive floor can generate static. In the cartoon, we see static building on the supervisor’s body. In real life, static is invisible. We can’t even feel a static shock less than 3500 volts (3.5kV). Yet a charge of only 100 volts—and even less (only 20 V) in an electronics manufacturing facility—can destroy sensitive electronics. 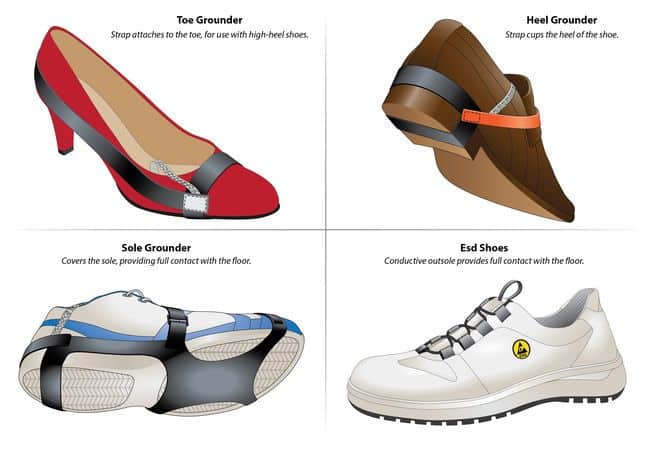 Low charge-generating materials, like conductive rubber or ESD carpet, don’t generate static either—even on people wearing regular street shoes. So, people can walk across the floor, tap dance, or do a jig, and they won’t generate static. Static won’t accumulate on their body, and the electronic equipment in the room—including headsets and handheld devices—will be safe. 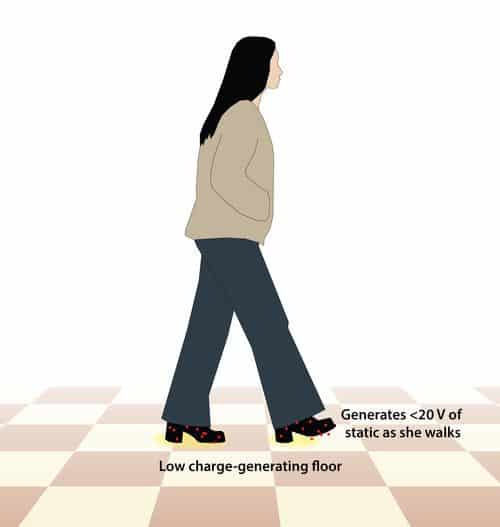 As no one at StaticWorx had any experience in producing a cartoon, we had our work set out for us. As marketers, we like to think we know how to tell a good story. With some Internet research (what other kind is there?), we figured out how to write and format a video script.

Then we went back online to look for an animator.

To our great good fortune, our search turned up Lewis Rogers. Lewis is amazing! One look at his portfolio convinced us to spring for the extra bucks, and create the cartoon in 3D. With 3D we hoped the cartoon would look like an actual film, one you might see at the movie theater or on TV.

Happily, Lewis agreed to work with us, and thus began a genuinely awesome collaboration.

With our script, we gave Lewis character sketches along with a general idea of what each character should look like, how they would talk, and what we wanted each role to portray.

Lewis took it from there. As he drafted each character, he gave us sketches to approve. Once the characters were in place, he roughed out the scenes, and selected voice artists for us to audition. By the time two or three weeks had gone by, we had hired two terrific voice artists, they’d recorded their parts, and Lewis had begun to animate the scenes. Forgive us for saying, we felt like we were in Hollywood, creating and directing this movie we’d imagined and written.

Lewis shared each step along the way and gave us the opportunity to make changes as we saw fit. As we said—awesome collaboration! Once the cartoon was finished, Lewis set it to music, and—the cartoon being as amazing as we believed it was—we thought we were good to go.

Of course, over-hyped expectations and reality never match up. Early viewers, while careful to compliment us on our creativity and innovation, tell us how cool and funny the cartoon was (it is funny—at least we think it is), told us that we were not getting our message across.

Three hand-wringing weeks later, after one of our colleagues created a teaser, we saw the light.

We changed the beginning and end, adding a static expert to introduce the story and explain the technical details, and—echoing the teaser—restructured the cartoon. Now, in place of a traditional (read: boring) linear structure, we added flashback. Relieved of continuity issues, we could eliminate much of the backstory, show only the highlights, details that further the story.

If you have the time, we hope you’ll take a few minutes to listen to Lewis Rogers, animator extraordinaire, talking about how he creates and animates a cartoon. You won’t be sorry!

All StaticWorx posts are written by our technical team and based on industry standards and specifications, test data, independent lab reports and other verifiable data. We provide ESD training and offer CEU credits to architects. If you’re interested in an ESD training session or architects’ Lunch and Learn workshop, give us a call: 617-923-2000.

A major part of any ESD control program is getting proper flooring in place. How can one replace a floor without generating any debris? Learn more.

A well-designed, comprehensive, fully realized program is a must for manufacturers serious about ESD control. Learn why ESD programs fail.

ESD Floors should never be specified based on the descriptive terms conductive or static dissipative. Always base ESD specs on verifiable metrics. Find out why.

If the vapor barrier fails to adhere to the subfloor, tiles will lift. Bond test and manufacturer oversight are crucial to ESD floor installation success.

What’s the difference between conductive and static-dissipative flooring? Facts, analogies and images illustrate the difference in easily understood terms.

Qualifying an ESD floor helps ensure you get the floor you paid for. Find out why you should never buy an ESD floor without qualifying according to ESD S20.20.

Qualification is the first step in selecting an ESD floor. Learn how to perform resistance tests to be sure the floor meets electrical & safety standards. 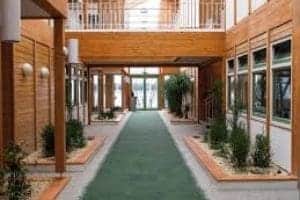 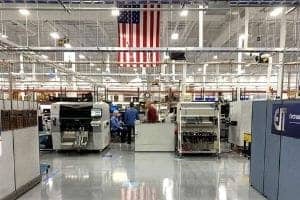 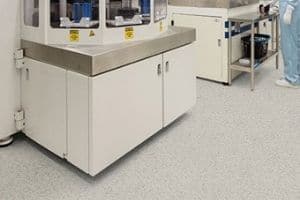 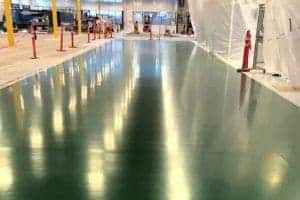 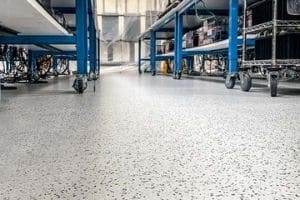 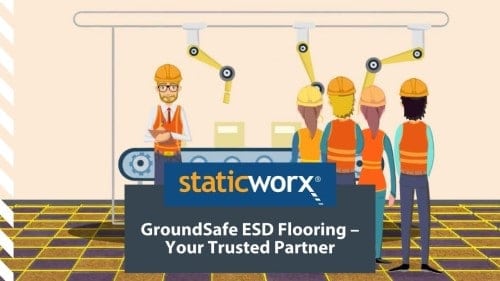